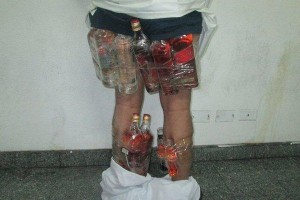 Saudi Arabian customs officials have taken to Twitter to share pictures of some of the more creative attempts to smuggle alcohol into the country.

One set of images posted by the Saudi Customs account Jan. 24 shows a man wearing a robe with various bottles of liquor trapped to his legs and underpants.

The department shared one image of the man fully dressed and two others with the liquor bottles exposed.

Another photo set shows a man attempting a similar feat with a pair of specially designed pants with multiple hidden pockets concealing bottles of alcohol. The customs agency also shared photos of alcoholic beverages being smuggled inhidden car compartments, fake crates and industrial-style containers. One set of photos shows how smugglers attempted to disguise cans of beer as cans of Pepsi.