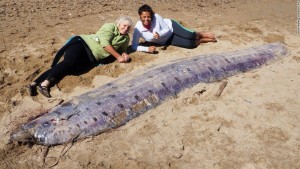 Annie MacAulay found a fish washing ashore on Catalina, an isle of Los Angeles while taking her kids for a kayak training course. MacAulay told the newspaper that she had been living in the isle for 20 years but never ever seen an oarfish. She is the chairwoman and CEO of a not-for-profit agency which raise awareness about the environment via adventurous tourism.

“It is like a fate that I was there that time”, said MacAulay. “I usually work in the office, not at the seaside”. The fish’s body still stayed in the western part of the isle. However its eyes and tales were ate by the birds and other animals. Local government still questioned why the dead fish could drift to Catalina. The species normally live in the deep ocean and rarely appear on the water’s surface.

The Catalina Island Marine Institute reveals that oarfish normally dive over 900 meters deep, therefore they have little knowledge about their behavior or population. They also recorded a 5.5 meter oarfish spotted on the island in October 2013.

Giant oarfish (Regalecus glesne) was first described in 1772 however it is very hard to catch them because of the distance of their living place. According to scientists, this is the longest bony fish in the world with the length can reach 17 meters and the weight can be 270 kilograms. Oarfish drift into the coast can be attributed to seismic activities.