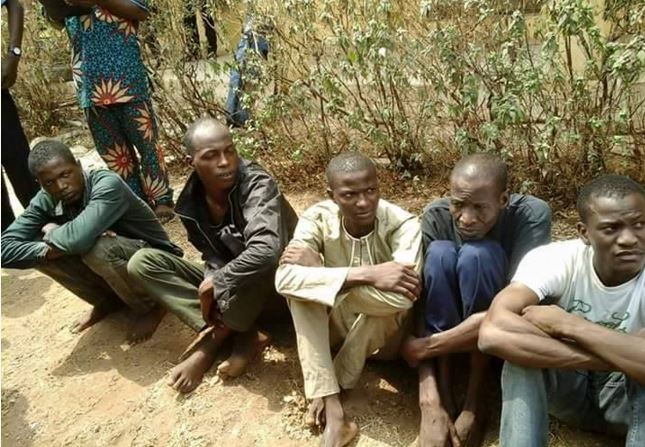 The Delta state police command has paraded six Hausa suspects, who confessed to the heinous kidnap and murder of the traditional ruler of Ubulu-Uku, Delta State. Addressing a press conference Friday, the State Commissioner of Police, CP Alkali Baba Usman said a of total six persons have been arrested including a female teenager and the corpse of one of the suspects.

According to CP Alkali, the monarch was kidnapped on 5th January, 2016, in the company of one Pastor Afamefuna Charles Ugbo, who later escaped from the custody of the abductors.

“The hoodlums opened communication using the Obi’s phone and demanded for ransom on 6/1/2016. While this was on, on 7/1/2016 one Pastor Afamefune Charles Ugbo was found wandering and taken to Police Station and he confirmed being kidnapped together with the Obi who picked him in his car in Ubulu-Uku on 5/1/2016”, the CP stated.

The Police boss said in the course of Police investigation on 8th January, one Jamilu Ahmed was arrested at Abraka market, Asaba in possession of the late Obi’s Samsung handset. “The suspect’s statement to investigators led to the arrest of one Umar Abubakar”, who claimed to have sold the handset to Jamilu, adding that one “money dey”, presently at large gave him the Obi’s Samsung handset to sell for him. The leader of the gang, Garba Abubakar, (a.k.a Dogo) was arrested by police detectives on5/2/2016, at a settlement in Alfarma village in Gangaza LGA, Sokoto State.

Also arrested was the wife of the gang leader, Farida Abubakar, who was arrested on 29/1/2016 in Ngurore town of Adamawa State. She was in possession of a Nokia Asha 201 handset (pink colour), belonging to the escaped victim, Pastor Afamefune Charles Ugbo.

Other arrested suspects in the heinous crime were, Usman Musbau (who deleted all traceable information from the late Obi’s phone) and Suleiman Musa (the second in Command of the kidnap gang, who confessed to the crime and mentioned his gang members.