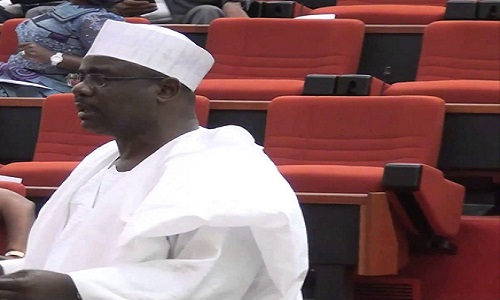 Contrary to speculations in some quarters that the passage of the 2016 Budget has been suspended indefinitely over some discrepancies, Senate leader, Ali Ndume, yesterday said that the Senate would endeavour to pass the budget before the end of March, which is the end of the 2015 fiscal year.

Ndume, who was fielding questions from journalists in Abuja, said that contrary to the earlier stand of the Joint Senate and House of Representatives Commit¬tees on Appropriation that the passage of the budget has been suspended indefi¬nitely, said that though the February 25 date initially proposed may not be feasible again, the budget would, however, be passed before March ending.

The senator noted that it was the wish of the National As¬sembly to pass the budget five weeks before the expira¬tion of 2015 Budget imple¬mentation but due to what he termed some errors, it was now almost impossible.

“We have not postponed it indefinitely; we are saying that with the developments in the consideration of the budget and as time goes on, the February 25 deadline we gave ourselves may not be realistic.

“That is why we now said that going by this, it is not possible to say we will come back on 25th and say this is the budget, but we are not saying that we have suspended it indefinitely.

“The reason we fixed 25th was because we wanted to have a gap of five weeks.

“If there are issues here or there that still needs to be fixed before the expiration of the 2015 Budget imple¬mentation by March 31, we will finish it.

“We have a time frame and that is the determina¬tion to get the budget out as soon as possible and by the grace of God, we will pass it before end of March”.

Senator Ndume further said that the leader¬ship of the National As¬sembly had met with Min¬isters to iron out the grey areas and make corrections to the contentious areas as well.

The Senate leader also assured that the red chamber would ensure strict compliance with the implemen¬tation of the budget.

He said that once funds were available, he was con¬vinced that the present administration would imple¬ment the budget to the letter.

“This is the first time that the budget process is truth¬ful, frank and honest and interactive: yester-day we had a long meeting with the ministers looking at the re¬alities and challenges”, Ndume added.