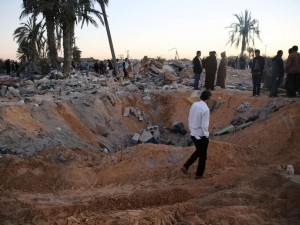 Two Serbian embassy employees who were being held hostage by Isis were killed in an air strike targeting the group in Libya. Serbia’s Prime Minister Aleksandar Vucic said there was no doubt that Sladjana Stankovic, a communications officer, and Jovica Stepic, a driver, died in the bombing in the early hours on Friday morning. They had been abducted by militants in November after their diplomatic convoy, including the ambassador, came under fire near the coastal Libyan city of Sabratha.

They were being kept in a building outside the same city when it was hit by American air strikes targeting a senior Isis “facilitator” linked to terror attacks in neighbouring Tunisia. “Apparently, the Americans were not aware that foreign citizens were being kept there,” Mr Vucic told reporters.  Ivica Dacic, the Serbian foreign minister, said they were told of the deaths by foreign officials but that had no confirmation from the Libyan government. “We got the information, including photos, which clearly show that this is most probably true,” he added.

The US sent F-15E fighter jets on the operation, which is believed to have killed up to 40 Isis militants including Noureddine Chouchane, who had been linked to June’s hotel attack in Sousse, which killed 38 people, and the massacre that killed 22 people at the Bardo National Museum in Tunis.

He said Serbian authorities knew where  Ms Stankovic and Mr Stepic were being held and had been working to get them back, adding that Libyan troops were considering an operation to free them.  “I believe we had been close to the solution for them to be freed. Unfortunately, as a consequence of the attack against Isis in Libya, the two of them lost their lives,” Mr Dacic told reporters.  “We will seek official explanation from both Libya and the United States about the available facts and the selection of targets.”