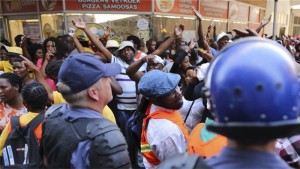 Opposition members have disrupted South African President Jacob Zuma’s annual State of the Nation speech, with some politicians walking out of the joint session at parliament. Zuma had not yet stepped to the podium on Thursday when members of the Economic Freedom Fighters (EFF) party delayed proceedings by raising questions ahead of the much-anticipated address.

After more than an hour of delays, Zuma began to read his speech, only to be repeatedly interrupted by members of opposition parties in chaotic parliamentary scenes.  “We can not listen to somebody who has broken his oath of office. He is no longer fit to lead our people,” Mosiuoa Lekota, the leader of the Congress of the People party that split from the Zuma’s African National Congress in 2008, said before being escorted out of the chamber.

EFF party members also walked out of parliament after being asked to leave or remain silent.

Al Jazeera’s Fahmida Miller, reporting from outside the parliament, said that anti-Zuma protesters are angry at government corruption, the state of the flagging economy and the president’s use of public money to  renovate his private residence. “Analysts are calling this Jacob Zuma’s toughest State of the Nation yet,” Miller said. “The country is facing a number of issues, many of them centred around the economy,” she continued.

The central bank has forecast growth will reach only 0.9 percent this year and unemployment is at 25 percent. The worst drought in a century is forcing Africa’s top grain producer to import maize. The mining industry, hit hard by slowing demand from China, is shedding jobs and shutting unviable mines.