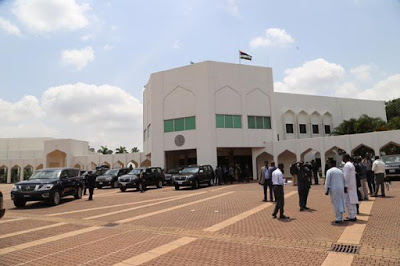 The State House is neither a place for giving contract nor peddling influence, the Presidency has warned.

The Chief of Staff to the President, Mallam Abba Kyari, gave the warning yesterday at a programme for some retired and newly posted staff at the Aso Rock Presidential Villa, Abuja.

He urged State House staff to embrace the change slogan of President Muhammadu Buhari’s administration, stressing that “for change to have meaning, we have to do things differently”.

He described as cheap blackmail, a recent tweet alleging that people paid up to about $40,000 to his office before being allowed to see the president.

The Chief of Staff also stated that if the country worked, it would be for the good of all and vice versa.

In his remarks, Permanent Secretary in the State House, Mr Jalal Arabi, advised those on posting to use their knowledge and experience to project Nigeria’s image.

The event was in honour of Mr Kabiru Bala and Mr Alexander Ajayi, who were posted to Thailand and the United States respectively, as well as Dr Ohoji Okoko and Dr Joseph Ochogwu, who were returning to Ministry of Health and Institute for Peace and Conflict Resolution respectively.