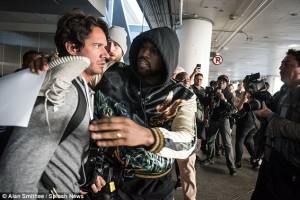 Arguably the most controversial rapper of our time, Kanye West, 38, surprisingly played the role of peacemaker when he separated two photographers who were having a combat hand-to-hand.

Kanye was mobbed by fans as usual when he touched down at the busy terminal.

He was all smiles until he noticed two photographers pushing each other.

Both men got into a heated altercation and attempted to snatch one another’s camera equipment.

As soon as he noticed, he quickly stepped in to break up the scuffle and did so by restraining one of the photographers.

The photographer graciously thanked Kanye with a huge hug.