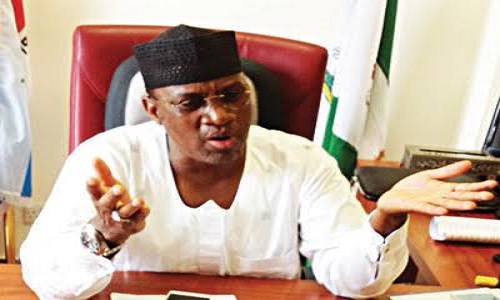 The senator representing Zamfara Central on the platform of All Progressives Congress, APC, Kabiru Marafa, has declared that nobody can suspend him from the Senate for some views he recently expressed in an interview.

Some senators had dragged Marafa, a member of the anti-Bukola Saraki group, Unity Forum, before the Committee on Ethics, Privileges and Public Petitions, over alleged misconduct.

The senators – Isah Misau and Matthew Urhoghide – had accused their colleague of granting press interviews that rubbished the reputation of the National Assembly.

Senator Marafa, however, shunned the committee despite his earlier promise to appear before it and defend himself.

Ahead of the Senator Samuel Anyanwu-led Committee submitting its report during plenary today at the Senate, it is believed that Marafa may be suspended.

But in a reaction yesterday, the senator said rather than suspending him, it is Senate President Saraki that should be suspended.

At a press briefing in Abuja, Marafa insisted that there was no offensive remarks in the said interviews he granted the press.

‘Nobody, I repeat, nobody in that Senate can suspend me over those remarks I made in the said interviews”, he boasted. “Rather, it is the Senate President, Bukola Saraki that should be suspended by the Senate for turning things upside down within the last eight months from forgery of Standing Orders to illegally increasing the number of standing committees in the Senate from 57 to 65, with attendant violation of ranking rules in their compositions”.

“And above all, refusing to resign as Senate President in the face of his trial for corruption charges at the Code of Conduct Tribunal and invariably battering the image of the Senate.

“Saraki should remember that when the issue first came up in August or September last year, we didn’t tell him to resign. So, he cannot by whatever means now, gag us and gag our mouths.

“The constitution of the Federal Republic of Nigerian gives us the right to say our opinions, to air our views and nobody can deny us that”, Senator Marafa maintained.

The senator linked the controversy generated by the alleged missing 2016 Budget to machinations by “fifth columnists” operating on behalf of Senate President Saraki, saying “These fifth columnists were shouting at different times that the budget was missing, the budget had been doctored, the budget was padded and that it could no longer be passed as earlier planned.

“Honestly speaking if am to comment on the controversy that has been trailing the 2016 budget in the Senate, I will say it is all the work of the fifth columnists there.

“You remember we woke up after 15 days or so of the receipt of the budget in the National Assembly. We woke up one day and the Senate President just came and said there was no budget, that the budget was stolen, thus embarrassing everybody. But the following day, the Speaker came out to say the budget was not stolen.

“We knew how they came into the leadership of the National Assembly or the Senate. Was it a coincidence that the issue of padding and everything just came up after the Supreme Court told Saraki to go and face your trial?”