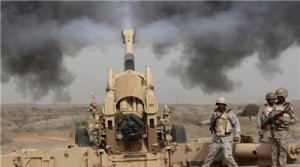 Foreign army soldiers who enter Syria without government consent would “return home in wooden coffins”, Syria’s Foreign Minister Walid al-Muallem said, in a warning to Saudi Arabia. Muallem’s statement at a news conference on Saturday came two days after Riyadh said it would send troops to Syria if the US-led coalition fighting the Islamic State of Iraq and the Levant (ISIL) rebel group would approve of it.

When asked about the possibility of Saudi ground troops entering Syria, he said although it was unlikely, “with the crazy Saudi leadership nothing is far-fetched”. “Any ground intervention in Syria, without the consent of the Syrian government, will be considered an aggression that should be resisted by every Syrian citizen,” he said. “I regret to say that they will return home in wooden coffins.”

He repeated the line three times during the one-hour press conference, saying it applies to anyone who attacks Syria with ground troops.  Muallem also appeared to indicate a boosted confidence that the government’s recent military advances against opposition fighters put it “on track” towards winning the five-year war.

“Like it or not, our battlefield achievements indicate that we are headed toward the end of the crisis,” he said, before calling on rebel fighters to “come to their senses” and lay down their weapons. Muallem’s comments follow the collapse of the latest UN-led Syria peace efforts and a Russian-backed Syrian government offensive near the city of Aleppo that sent thousands of residents fleeing toward Turkey.