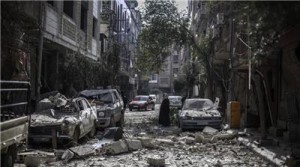 A series of suicide bombs near a Shia shrine in Damascus and in Homs have killed at least 129 people on a day the US and Russia claimed progress in securing a ceasefire to end the Syrian conflict. The Islamic State of Iraq and the Levant (ISIL) group, which has seized territory in Syria and Iraq, claimed it was behind Sunday’s attacks, which killed at least 63 in Damascus and 46 in Homs.

Some sources put the death toll higher. SANA, the official government news agency, said a car bomb followed by two suicide attacks in the area of Sayyida Zeinab shrine killed 83 people and left 178 others, including children, wounded. The Syrian Observatory for Human Rights gave a lower toll of 63 dead but said many of those wounded were in critical condition.

At least 60 shops were damaged and cars totally destroyed, the AFP news agency reported. At the end of January, bombings claimed by ISIL killed at least 70 people near the same shrine. Sayyida Zeinab is believed to contain the grave of a granddaughter of Prophet Muhammad and is particularly revered as a pilgrimage site by Shia faithful.

The blasts in Damascus came just hours after dozens of civilians were killed in a double car bombing in the central city of Homs. SANA said the attack happened near the entrance to al-Arman neighbourhood, with the Syrian foreign ministry saying that at least 46 people died and dozens were wounded.