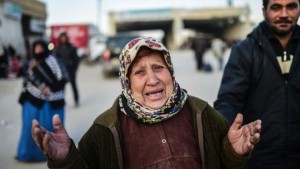 Fierce clashes have been reported near Aleppo in northern Syria, as government forces try to surround rebels holed up in the strategic city. Monitoring group the Syrian Observatory for Human Rights said about 120 fighters on both sides had been killed around the town of Ratyan on Friday. As many as 20,000 refugees fleeing the fighting have spent the night at a border crossing with Turkey.

Turkey says it is prepared to help the refugees but the frontier is shut. In the past few days, the Syrian army backed by Russian air power has made a series of gains in Aleppo province. Syrian state TV said on Friday that pro-government forces had seized Ratyan, just north of Aleppo city.

The thousands fleeing Aleppo have spent their first night in temporary shelter at the Turkish border but the crossing remains closed. Turkey has welcomed more than two million Syrians since the start of the war and it is unclear whether it will accept another huge wave in one go. Human rights groups are calling for the gates to open but at a time when the EU is trying to reduce the flow of refugees to Europe, there will be diplomatic pressure on Turkey to act with caution.

The Turkish government is using the new refugee exodus to take aim at Russia, whose air strikes on Aleppo have prompted thousands to flee. But there is no sign that Russia is pulling back and as opposition fighters retreat, the Assad regime is strengthened and thousands more civilians will flee, hoping for sanctuary in Turkey.