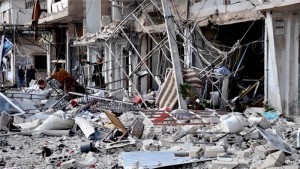 Syria’s main opposition bloc has said it will support a temporary two-week truce to test the seriousness of the other side’s commitment to a US-Russian plan to end fighting. Earlier this week, the US and Russia agreed on a “cessation of hostilities” between the Syrian government and groups fighting it in a deal that excludes the Islamic State of Iraq and the Levant (ISIL) and the al-Nusra Front.

The agreement called on all sides to sign up to the deal by midday on February 26 and to stop fighting by midnight. “The High Negotiations Committee believes a provisional truce for two weeks would provide a chance to determine the commitment of the other side” to the ceasefire, the opposition bloc said in a statement on Wednesday.

The opposition statement came after Syria’s president assured Russia of his readiness to respect the ceasefire, the Kremlin said on Wednesday.

“A phone call took place between Russian President Vladimir Putin and President of the Syrian Arab Republic Bashar al-Assad,” the Kremlin said in a statement. “In particular, [Assad] confirmed the readiness of the Syrian government to facilitate the establishment of a ceasefire.” Assad described the ceasefire as an “important step towards a political resolution” for Syria’s civil war, according to the Kremlin statement.

However, Putin and Assad emphasised the need to continue an “uncompromised fight” against ISIL, the al-Nusra Front and other groups “which are included in the respective list of the United Nations Security Council”, the Kremlin added.  Putin also discussed the ceasefire with the leaders of Iran and Saudi Arabia on Wednesday.