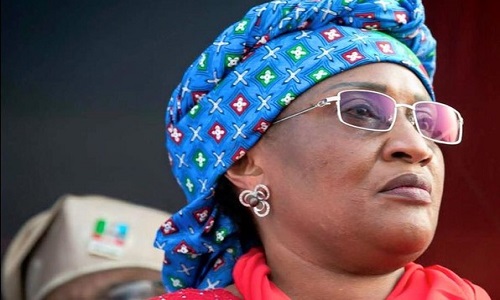 The Minister of Women Affairs and All Progressives Congress (APC) candidate in the April 11 governorship election in Taraba State, Senator Aisha Alhassan, is currently the number one trending topic on Twitter with the hashtag “#SayNoToAishaAlHassan_Taraba”.

The Minister, who was declared winner of the governorship election in Taraba State by the election tribunal sitting in Abuja, is currently at the Supreme Court to challenge the ruling of the Appeal Court, which not only upturned the decision of the tribunal, but upheld the election of the Peoples Democratic Party, PDP’s Darius Ishaku as governor of the state.

However, that is not the reason ‘Mama Taraba’, as she is fondly called by her supporters and admirers, is trending on Twitter.

She is the topic of discussion over a leaked video, reminiscent of the Ekitigate saga – which was a leaked audio file – in which she could be heard, and indeed seen, in a conversation with some of her associates expressing the confidence that the apex court would upturn the decision of the appellate court.

Speaking in Hausa, the APC governorship candidate in Taraba told her associates: “some judges that I know called me to express shock over the Court of Appeal judgment (upturning the decision of the tribunal declaring her winner) and advised me to make sure I go to the Supreme Court”.

She further told her associates whose identities we could not immediately ascertain that “… even if I die, APC will still pursue the matter at the Supreme Court”.

Watch video below and read the reactions of some Nigerians to the Minister’s statement:

#SayNoToAishaAlHassan_Taraba this news is totally different from what the woman is talking about, get aboki & let him interprete 4 u.

Will all these APC e-rats say they've not seen this video?#SayNoToAishaAlHassan_Taraba

To think she's ready to lose her life"@GBAGAUN_SEEKER: We won't allow her go free #SayNoToAishaAlHassan_Taraba

Nigerians can't be quiet"@GBAGAUN_SEEKER: She hijacked the judicial system to favour her claim #SayNoToAishaAlHassan_Taraba"

The translation given to that #SayNoToAishaAlHassan_Taraba video is not only warped, it's twisted to serve a pre-determined purpose.

Finally, a sane voice. This crowd mentality is something else. https://t.co/aQL0NaSnYl