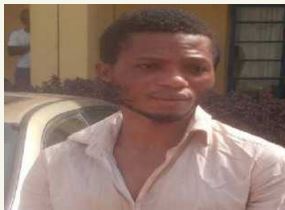 NEMESIS has caught up with two syndicates which specialized in the hijacking of heavy duty trucks along Benin / Ore Expressway and the snatching/stealing of posh vehicles in Ondo State. Different vehicles and trucks were recovered from the syndicates by detectives from the state Police Command. Sunday Vanguard gathered that two suspects, Dele Olayemi and Ayo Akinde, were leaders of one of the syndicates which specialized in stealing cars parked by owners.

•Olayemi….Claimed to have snatched 11 different vehicles
The other syndicate, which specialized in the hijacking of heavy duty trucks and petrol tankers, was said to have been coordinated by four suspects, namely: Sunday Olufemi, Idowu Omowole, Ebenezer Onos and Akeem Mayama,

All the suspects who have allegedly made confessional statements are in police detention.

Over 11 different vehicles were recovered from the first syndicate while 14 were taken from the other group.

Speaking with Sunday Vanguard, the leader of the syndicate that allegedly snatched posh cars, Moses Olayemi, said he went into the business to make money so as to build a house.

“ My father married three wives and he refused to send us to school. I only went to primary school.

“ I have been able to buy a land and what I am looking for is money to start the building after which I want to marry. “ Some of my friends introduced me into this business of snatching and stealing of cars,”he stated. When asked how many vehicles he had stolen, he said he could only remember the number of those he stole in the last 11 months.

“ I can only remember that over 11 different cars were snatched and stolen where the owners parked them by my gang in the last 11months. “The receiver of the stolen vehicles, one Omo Ode, used to buy the vehicles for between N80,000 and N140,000.” Dele explained that the dealer usually changed the number plate and other parts of the vehicle before selling to unsuspected buyers.

“We would change some parts of the vehicle so that the owner would not be able to identify it because most of the cars are being used in Akure, the state capital” The suspect, however, wondered why the dealer, popularly called ‘Oluomo’, who usually bought the stolen vehicles from them, was not arrested alongside them.

On how he stole vehicles, he said, “ I will enter the market, buy ignition key. I will use the key to test the car. If it starts, I will take the vehicle away; if not, I will leave it and run away.” Sunday Vanguard gathered that Dele ran out of luck when, at gun point, in front of UBA, in Akure, he snatched a Nissan Almera car. Detectives swung into action after the matter was reported to the police and the car was later recovered at Oba Akoko area of the state with many of its parts replaced. Ondo State Police Commissioner Mike Ogbodu said the suspects would soon be charged to court.