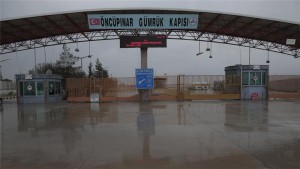 Tens of thousands of Syrian refugees have gathered near a border crossing with Turkey after fleeing a major government offensive on rebel-held areas in the Syrian city of Aleppo. Turkey’s Foreign Minister Mevlut Cavusoglu said on Saturday that his country would keep its “open border policy” for the refugees, adding that 5,000 of them have already been allowed into Turkey.

“Another 50,000 to 55,000 are on their way and we cannot leave them there,” he said from the Dutch capital, Amsterdam, after holding talks with EU counterparts.

However, the governor of the Turkish province of Kilis, on the border with Syria, said thousands of Syrian refugees arrived at the Turkish border near Kilis City in the last 48 hours and were being accommodated at camps on the Syrian side of the border.

Suleyman Tapsiz also told reporters at the Oncupinar border crossing near Kilis that another 70,000 Syrians could be expected if Russian air strikes and military advances by the Syrian government continued.

“Our doors are not closed, but at the moment there is no need to host such people inside our borders,” he told Associated Press news agency, adding that the refugees had been given food, blankets and tents. The Syrian army, backed by Russian military support, is carrying out a major offensive that has sparked a severe humanitarian crisis in rebel-held areas of Aleppo.