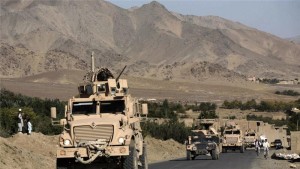 Afghan soldiers dragged two hospital patients outside a Swedish-run clinic and shot them along with a 15-year-old boy, an NGO claimed on Friday. The soldiers raided a health clinic operated by the Swedish Committee for Afghanistan (SCA) in Tangi Saidan in Wardak province late on Thursday, killing the three people, Al Jazeera has been told.

“The Afghan security forces barged in the clinic, misbehaved with some of our staff members and dragged out two injured patients from the health clinic along with their caretaker,” the SCA’s spokesman Muhammad Salahuddin Momand, said on Friday.  “The caretaker was a young boy, around 15 years old. All three of them were shot dead outside of our clinic. This is unacceptable. They have violated humanitarian laws. We will protest against this.”

There was no immediate confirmation from the army. However, Afghan officials told Al Jazeera that the hospital was located in a Taliban-controlled area and the victims were members of the armed group.  “The Afghan security forces raided the hospital as the members of the Taliban group were being treated there,” Akhtar Muhammad Tahiri, head of the Wardak provincial council told Al Jazeera.

“In any case, the hospital is in a volatile area and we are doing our best to provide security to it.”  In Stockholm, Jorgen Holmstrom, country manager for the SCA described the attack as  a “gross violation of humanitarian principles and the Geneva Convention”. “The patients who are being treated at our clinics have the right to be protected,” Holmstrom said in a statement. The SCA runs education and other development programmes in almost half of Afghanistan’s 34 provinces.