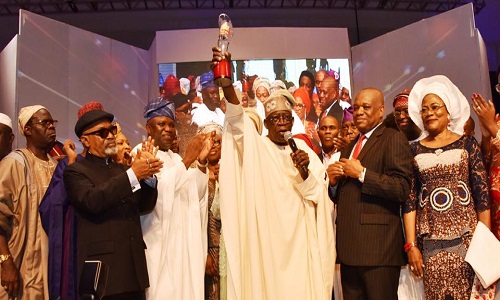 A former Governor of Lagos State and national leader of the governing All Progressive Congress (APC), Asiwaju Bola Tinubu, has said the collective efforts of Nigerians was responsible for the emergence of Maj.-Gen. Muhammadu Buhari as president in the 2015 general elections.

Tinubu, who has being widely acknowledged as playing a lead role in the electoral victory of the APC last year, stressed that without the support of Nigerians, change would have been difficult to achieve.

The APC chieftain, who won The Sun newspaper Man of The Year Award held in Lagos on Saturday, said the people provided the bulwark for the unprecedented political change that saw an incumbent lose in an election in the most populous black nation on earth.

“What was accomplished in 2015 was not a singular effort. It was done through the collective love and labor of millions of Nigerians. A handful of them were well known. Most of them are hardworking anonymous people who together constitute the backbone and great strength of this nation.

“God in His wisdom placed me in the position to recognize the change that was needed and to help effectuate that change. I thank God for giving me this chance and for allowing me to be born a black man and a Nigerian”, Tinubu stated.