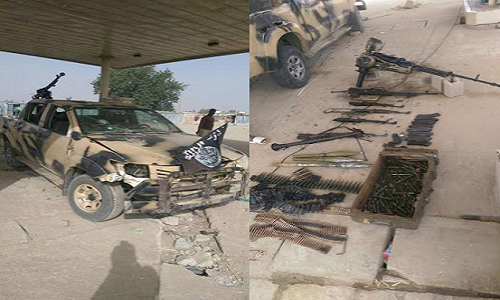 However, a soldier paid the supreme sacrifice in the process of foiling the attempted attack.

A statement by the acting Director, Army Public Relations, Sani Usman, said the terrorists, while fleeing from the defense put up by the troops, ran into the hands of the Armed Forces Special Forces, who had already mounted blocking positions.

The army spokesman said the terrorists were decisively dealt with by the Special Forces, who succeeded in killing many of them and recovering a vehicle, arms and ammunition.

Usman, a colonel, added that a member of the Civilian JTF was seriously injured and a military vehicle damaged by a Vehicle Borne Improvised Explosive Device (VBIED) suicide bomber.

The statement said “The troops recovered 26 bodies of the Boko Haram terrorists, while others escaped with gunshot wounds, destroyed 3 VIED, 1 MBIED and 2 Gun trucks”.

“The casualties have seen been evacuated while the troops have been pursuing those terrorists that escaped with gunshot wounds”, it added.

Col. Usman noted with encouragement that in spite of the loss of a colleague and a vigilante, the troops maintained dominating presence in the general area and are more than ever before committed to ridding the area of remnants of the Boko Haram terrorists.