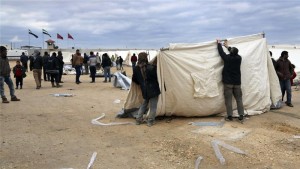 Turkey and Germany have agreed on a set of measures to deal with the Syrian refugee crisis, including a joint diplomatic initiative aiming to halt attacks against Aleppo, Syria’s largest city. On Monday in Ankara, officials from the two countries added that they would push to curb illegal migration.

German Chancellor Angela Merkel, who was in the Turkish capital for talks on how to reduce the influx of refugees into Europe, said after discussions with Turkish Prime Minister Ahmet Davutoglu that she is “not just appalled but horrified” by the suffering caused by Russian bombing in Syria. Merkel said that Turkey and Germany will push at the United Nations for everyone to keep to a UN resolution passed in December that calls on all sides to halt without delay attacks on the civilian population.

She said: “We have been, in the past few days, not just appalled but horrified by what has been caused in the way of human suffering for tens of thousands of people by bombing – primarily from the Russian side.”

“Under such circumstances, it’s hard for peace talks to take place, and so this situation must be brought to an end quickly,” Merkel said. Davutoglu said the city of Aleppo “is de facto under siege. We are on the verge of a new human tragedy.”