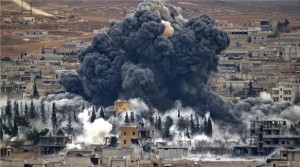 Turkey has said it is not optimistic about the implementation of a Syria ceasefire announced by the United States and Russia, and has threatened to keep up retaliatory artillery strikes against Syrian Kurdish fighters. “I welcome this truce, but I am not very optimistic that it will be respected by all the parties,” Deputy Prime Minister Numan Kurtulmus told reporters in Ankara on Tuesday.  He warned that Turkey could carry on shelling targets of the Syrian Kurdish People’s Protection Units (YPG) armed group inside Syria, and would continue “if necessary” to hit back at incoming fire from the neighbouring country even after the truce comes into force on February 27.

“Turkey will defend its territorial integrity. That is clear,” Kurtulmus added, pointing out that he had “reservations” about the viability of the ceasefire as he feared Russia would simply continue its air bombardments in Syria. “We hope that no one will try and carry out air strikes and that no one is going to kill civilians during the ceasefire.” Turkey has been alarmed by advances of YPG forces in northern Syria, fearing they are working to create an autonomous Kurdish region on the country’s doorstep.

Ankara accuses the YPG, the armed wing of Syria’s Democratic Union Party (PYD), of being the Syrian branch of the outlawed Kurdistan Workers’ Party (PKK) which has waged a decades-long armed campaign against the Turkish state. It also accuses the Syrian Kurdish forces of working alongside Russia, which strongly opposes Ankara’s key strategic aim of ousting Syrian President Bashar al-Assad.

The ceasefire deal was announced on Monday by Moscow and Washington but does not apply to the Islamic State of Iraq and the Levant (ISIL) group and the al-Nusra Front. Syria’s government said it would accept a halt to “combat operations” and would coordinate with Russia to decide what other groups – along with ISIL and al-Nusra Front – should be excluded from the plan.