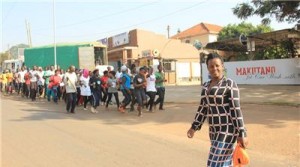 Ugandans have started voting in presidential and parliamentary polls with veteran leader Yoweri Museveni widely expected to extend his power into a fourth decade. Polls open at 7am local time and will close at 4pm. Initial results are expected as early as Saturday afternoon with the leading candidate requiring more than 50 percent of votes cast to avoid a second round run-off.

Museveni and his ruling National Resistance Movement (NRM) party, facing a challenge from seven candidates, are predicted to win a fifth term. The 71-year-old former rebel fighter seized power in 1986.  Over 15 million people are registered to vote, casting ballots in over 28,000 polling stations for both a president and members of parliament, with 290 seats being contested by candidates from 29 political parties.

Elections in 2006 and 2011 were marred by violent, and occasionally deadly, street protests and a liberal use of tear gas by heavy-handed police.  But apart from an outbreak of protests when police prevented the main opposition contender Kizza Besigye from campaigning in the centre of the capital, campaigning has been mostly peaceful.

“Whoever will try to bring violence, you will see what we shall do to him. Those who want violence should play somewhere else, not Uganda,” Museveni told thousands of supporters in his final rally on Tuesday. Some who attended that rally told Al Jazeera that they had been paid about $1 to be there. The NRM denies that it pays people to attend political events.