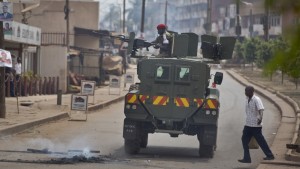 Uganda’s President Yoweri Museveni is set to extend his 30-year rule after taking a strong lead in an election disputed by rivals. With about half the votes counted on Saturday, the incumbent candidate had 60 percent of votes to leading challenger Kizza Besigye’s 35 percent.

Full results of the vote are expected to be released on Saturday afternoon. The vote has been marked by allegations of ballot fraud and multiple arrests of opposition activists, including Besigye. Police have arrested Besigya four times since the day of election and the opposition candidate is currently detained at his house in the capital Kampala.

Besigya’s third arrest was caught by Al Jazeera cameras as he tried to access a house where ballots were suspected of being altered.  On Friday Police in riot gear had set off stun grenades and fired teargas at Besigye supporters, who responded by hurling rocks and erecting street barricades.

US Secretary of State John Kerry called Museveni to voice concern over Besigye’s detention, harassment of opposition figures and the shutdown of social media such as Facebook and Twitter. Police officials said they were at Besigya’s home as a preventative measure to prevent a further escalation of violence and denied detaining him.