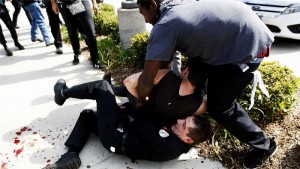 White supremacists from the (KKK) group and anti-racism protesters clashed in the US state of California during rival demonstrations, with several people stabbed and injured in scuffles. All three stabbing victims, including one suffering critical injuries, were part of a group that faced off with the rallying KKK members on Saturday in the city of Anaheim, police said.

Brian Levin, a witness, told the AFP news agency that several KKK members also suffered wounds ranging from minor to significant.  Thirteen other members of both sides were arrested. “It appears six KKK people arrived and were immediately attacked by counter-protesters, which led to a counter-protester being stabbed,” police spokesman Sergeant Daron Wyatt said.

The initial clash spurred several separate fights, Wyatt added, noting that two KKK members were stomped on by the crowd.  Levin said the counter-protesters “smashed the side window of the Klan SUV and the front windshield… At that point, the crowd got extremely violent.”

The Klan, which was formed in 1865, had up to four million members in the 1920s, but its membership has dwindled to between 5,000-8,000, according to the Southern Poverty Law Center. Although it has historically targeted black people, the KKK has also launched attacks against Jews, immigrants, gays and lesbians. Until recently, it attacked Catholics as well.