US Readies Missile Defence Assets Ahead Of North Korea Launch 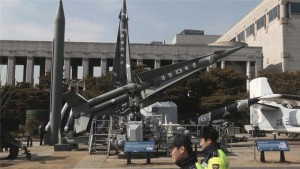 The United States plans to use missile defence assets to track an expected North Korean missile launch as tensions escalate over Pyongyang’s plan to fire a rocket soon. US Secretary of Defense Ashton Carter, however, declined to comment further on Thursday on any specific plans to position navy ships or move a large sea-based radar to the Asia Pacific region ahead of the imminent launch.

Japan has said it put its military on alert to shoot down any rocket that threatens its territory. North Korea notified the United Nations this week of its plan to put an “earth observation satellite” into orbit sometime between February 8 and 25.

Pyongyang says it has a sovereign right to pursue a space programme, although the United States and other countries allege such launches are missile tests in disguise.

Chinese Foreign Minister Wang Yi said Beijing sent its special envoy for the nuclear issue, Wu Dawei, to North Korea in what he described as “a serious situation”. “We don’t want to see anything happen that could cause further tensions,” Wang told Hong Kong’s Phoenix Television in London after Wu returned from North Korea.