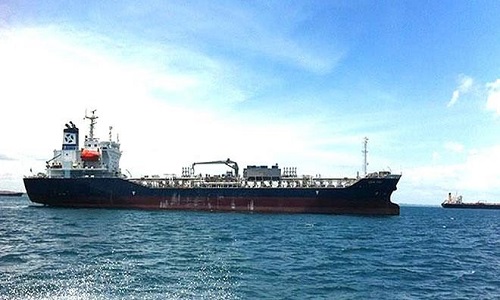 The merchant ship, MT LEON DIAS and its crew hijacked by pro-Biafra militants weekend, has been released, according to the latest report.

The vessel was flying the Liberian national flag when it was hijacked by the militants off the coast of Cotonou, Benin Republic.

The ship is said to be a chemical/oil tanker and is currently under the custody of the Beninois Navy.

The release of the ship and her crew members was confirmed by Director of Information, Nigerian Navy, Commodore Kabir Aliyu, on Tuesday.

Commodore Aliyu, said through a text message: “The name of the ship is MT LEON DIAS (9279927). An oil tanker, the ship is presently in Benin waters, about 75 nautical miles off Cotonou Port and she is under the watch of the Benin Republic Navy”.

Pro-Biafra militants, who seized the vessel, said to be an oil tanker about 100 miles (160 kilometers) off Nigeria’s Bakassi Peninsula, along Nigeria’s south-eastern Atlantic Ocean coastline, near the border with Cameroon, had threatened to blow her up along with its foreign crew of the Federal Government did not release leader of the Indigenous People of Biafra, IPOB, Mr. Nnamdi Kanu within 31 days.

Kanu, who is also director of Radio Biafra, has been in detention since last year October and is currently on trial in Abuja for treason.

The ultimatum was given at the weekend by a militant, who simply identified himself as ‘General’ Ben.

Uchena Madu, a factional leader of another separatist group – Movement for the Actualization of a Sovereign State of Biafra – said Ben was not a separatist but “some Niger Delta militant who has shown interest in working with us”.