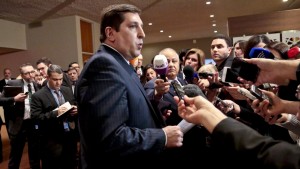 Western powers have rejected a proposed UN resolution drawn up by Russia that demanded the immediate halt of cross-border shelling by the Turkish army into Syria. The Russian draft presented at an emergency security council meeting on Friday sought to “cease any actions that undermine Syria’s sovereignty”.

When asked whethere he supported the move, France’s UN ambassador Francois Delattre replied, “the short answer is no”, the Associated Press news agency reported. Delattre said the current military escalation is “the direct result of the brutal offensive in the north of Syria led by the Syrian regime and its allies.” The French UN representaive added Russia must understand that its support for Syria’s President Bashar Assad is “a dead end that could be extremely dangerous.”

US Ambassador Samantha Power called the Russian draft “a distraction,” and urged Moscow instead to implement a resolution adopted unanimously by the Security Council in December endorsing a peace plan for Syria that includes a cessation of hostilities and negotiations between the Assad government and opposition.

The Kremlin said it regretted the rejection of the resolution and that it would continue to protect the Syria’s sovereignty.  “We can only express regret that this draft resolution was rejected,” Kremlin spokesman Dmitry Peskov said. “Russia naturally continues with its consistent, transparent and clear line to provide stability in the fight with terrorism, to preserve the terrorital integrity of the country (Syria) and the region.”