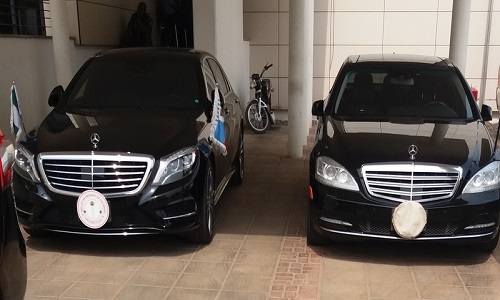 The Office of the President of the Senate has debunked reports in Saturday that Dr. Bukola Saraki has taken delivery of exotic new cars purchased by the National Assembly management for his official use, despite widespread criticism against such lavish spending at a time of economic downturn.
An online news medium had exclusively reported that at least four of the 10 vehicles meant for Mr. Saraki’s use had already been delivered and since been put to use by the Senate president.
The online newspaper confirmed that the vehicles delivered for Saraki’s use are one Mercedes Benz S500 and three Toyota Prado SUVs – all 2016 models – with a total value of N161.2 million.
Reacting to the report in a statement signed by Yusuph Olaniyonu, his Special Adviser (Media and Publicity), the Senate president said he has only one official vehicle, a Mercedes Benz, which was changed and that the spare car in his convoy is the old one he inherited and has been using since he assumed office in June of 2015.
The statement said it was wrong to classify vehicles provided for security agencies in Mr. Saraki’s convoy like the police and State Security Service by the National Assembly management for their own operations, as vehicles bought for the Senate president’s use.
The statement reads in part: “It is an obvious fact that the official and spare cars that the Senate president inherited and has been using are old and have been malfunctioning.
“There are instances like the day Dr. Saraki visited Keffi for the marriage of the daughter of Senator Abdullahi Adamu and another day at the Presidential wing of the Nnamdi Azikiwe International Airport that the spare vehicle broke down.
“In both instances, the spare vehicle did not return home with the convoy. The same vehicle had malfunctioned at the Presidential Villa and National Mosque on different occasions.
“It is for this reason that the Senate president approved that instead of providing two vehicles for him as he is entitled, only one should be bought to replace the official vehicle while the old official car should be converted to spare car.
“Also, if the National Assembly Management chose to provide operational vehicles for Security Agencies, should that be presented as if they are personal or official vehicles meant for the use of Dr. Saraki? These are vehicles that cannot be used for other purposes and by other people. The Senate President also have no control over the security vehicles.
“It is also surprising that despite the fact that Premium Times in the same story reported that the order for the vehicle was made in December, it chose to calculate the value of the vehicles based on current exchange rate of the Naira to the dollar. This is obviously a mischief aimed at making the figure look huge and justify the screaming headline.
“The press should avoid deliberately inciting members of the public against public officials. The Senate President and his colleagues are conscious of the economic situation in the country and will continue to act responsibly and responsively”.
Mr. Olaniyonu recalled that just last week, the Senate president learnt that the Ministry of FCT in its 2016 budget, proposed a N6 billion estimate for the construction of his official residence but he out rightly rejected the proposal.
He said Mr. Saraki immediately directed Senator Dino Melaye, Chairman, Senate Committee on FCT, to bring down the cost of the project to one billion Naira.
“He said that it should be made known to the Ministry that if it cannot construct the building with N1 billion then they should leave out the project entirely till after his tenure. He said he will rather stay in his present abode”, the media aide said.
He further stated that Senator Melaye had already acted as instructed as indicated in the report his committee presented to the Appropriation Committee.
“It should therefore be noted that if Dr. Saraki can demonstrate frugality and responsible leadership in a matter that saved the country so much money, how can it then be presented as if purchase of cars is a big issue that he cares so much about? Those who know the antecedent of the Senate president know that there is no type of vehicle that can excite him at this stage in his life”, Olaniyonu stated.