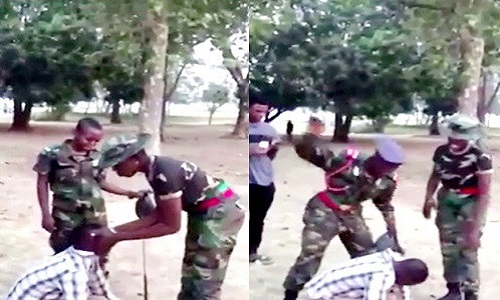 The Nigerian Defence Academy, NDA, yesterday explained why it could not expel some cadets captured on video torturing a civilian for no just cause.
Nigerians cried out in condemnation of some cadets led by a female, who were shown in a video clip, which went viral last month, dehumanizing a young man, later identified as Amari Sunday, a staff of Abuja Park “N” Pay, for allegedly commending the beauty of one of the female cadets.
While majority of Nigerians called for the expulsion of the cadets, the Commandant of the elite Nigerian military training institution, Major General Mohammed Ibrahim, said they could not be expelled because the time to prosecute them had lapsed.
According to the NDA Commandant, the time frame for expelling any cadet for wrongdoing must not exceed six months from the date the alleged offence was committed.
Speaking at the matriculation ceremony of 466 officer cadets of the 67th Regular Course, Maj.-Gen. Ibrahim noted that the incident in question took place two years ago when the cadets were first termers and had just been in the academy for only three months.
While noting that appropriate disciplinary action had already been taken on the cadets, he urged the newly matriculated ones to consider themselves lucky to have successfully passed the one month intensive military training.
Ibrahim assured that the NDA would give their welfare priority while the enabling academic environment would be provided for their study.
The NDA, situated in Kaduna State was founded in 1964 in response to the defence needs of the country, which gained independence four years earlier, to train officers for the Armed Forces of Nigeria.