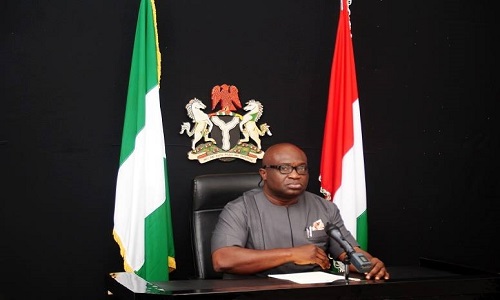 The Supreme Court on Friday said that Okezie Ikpeazu was returned as governor of Abia because Alex Otti failed to prove the allegations brought against his victory in the April 11, 2015 governorship election.
Messrs. Ikpeazu and Otti contested the election on the platforms of the Peoples Democratic Party (PDP) and All Progressives Grand Alliance (APGA) respectively.
Giving reasons for its Feb. 3 judgement, Justice Suleiman Galadima held that Mr. Otti and the APC were unable to prove the allegation of over voting, violence and corrupt practices allegedly perpetrated by the respondents.
“On the issue of over voting, the court holds that there was no sufficient proof as the voter register and the card reader report were not tendered.
“The criminal allegation of corrupt malpractices carried out by PDP loyalists for the benefit of the governor was not also proved”, he held.
On the cancellation of the election results in Obingwa, Osisioma Ngwa and Isiala Ngwa by the returning officers, Galadima held that it was wrong.
“That action amounted to the disenfranchisement of voters. It was also inappropriate for the tribunal to order the cancellation of election.
“All of this misappropriation only gave room for the unlawful declaration of the APGA candidate by the lower court.
“Those actions were perversion of justice and the apex court could not have allowed them”, he said.
Mr. Galadima held that the evidence placed before the court showed clearly that the tribunal usurped the constitutional duties of INEC.
“On the card reader, the court maintains its earlier position that the tribunal cannot supplant the voter register.
“The gadget is only meant to authenticate bearers of voter card and not meant to usurp the statutory power of the voter register.
“At the moment, the voter register remains the only authentic document as provided by Section 49 of the Electoral Act to prove allegation of fraud in elections”, Galadima declared.
(NAN)