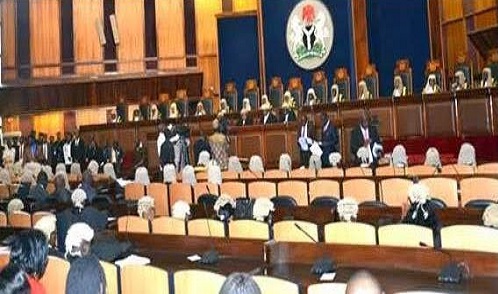 Nigeria’s Supreme Court in Abuja on Friday explained how it arrived at the decision upholding the election of Governor Nyesom Wike of Rivers State.

Although the apex court had delivered the judgment on January 27 but said it would explain the reasons for it on February 12, some Nigerians, especially supporters of the All Progressives Congress, APC, whose candidate, Dakuku Peterside, lost in the elections, expressed surprise.

The Supreme Court ruling’s judgment came as a surprise considering the fact that the River State Governorship Election Tribunal and the Court of Appeal, both nullified Mr. Wike’s election.

Reading the unanimous judgment yesterday, Justice Kudirat Kekere-Ekun, explained that the inability of the tribunal to be properly constituted during the determination of the matter, amounted to lack of fair hearing of the governor’s case.

She said the action of the tribunal was a good ground to set aside the entire proceedings before it, but that since it was an election matter which was time-bound, according to section 289 (6) and (7) of the constitution, it was necessary to consider the appeal according to its merit.

On the alleged violation of documents tendered at the tribunal and the appeal court, she said the function of the card reader, though quite commendable in the conduct of the 2015 elections, is solely to authenticate the owner of the voter’s card and prevent multiple voting by a single voter.

The Supreme Court, however, said the technology cannot replace the voters register, recognised by the constitution.

Justice Kekere-Ekun further said the 49th prosecution witness (PW), who is an assistant director of information communication and technology at the Independent National Electoral Commission, acknowledged that the report she had testified to, was prepared by a certain Mrs. Nnena, a staff of her unit.

She added that the witness also told the tribunal during cross examination that she was not in Rivers State during the election and did not examine the card reader after the exercise.

Mrs. Kekere-Ekun said since the witness did not take part in any stage of the accreditation of voters, she was not in any position to testify as to how the card reader functioned during the election.

“The position of the law is that there is a difference between admissibility (relevance) and probative value (proof) to be attached to the said evidence”, the justice said.

“Where the maker of a document is not called to testify, the document should not be accorded probative value, notwithstanding its status as a certified copy document”.

Furthermore, she pointed out that the testimony of PW49 is evidence to the fact that exhibit A9 could be a conclusive proof of the number of accredited voters at the election.

Mrs. Kekere-Ekun said witnesses at the tribunal had testified that where the card reader failed to read a voter’s PVC, incident forms were used, but that none of the forms were tendered by the first and second respondent.

She also noted that out of the 11 voters registers tendered for 11 out of 23 Local Government Areas of the state, no attempt was made to link them to exhibits A9, which contained the number of accredited voters.

She added that documents before the court proved that the number of accredited voters stated in forms ECA8 was different from the number stated in exhibit A9.

This, she said, was grossly inadequate in proving non-compliance, which is expected to have been done, polling units by poling units, according to the provision of the constitution.

She said, “Section 139 of the Constitution states that where a petitioner complains of non-compliance with the provisions of the act, he has an onerous task of proving it, poling unit by poling unit, ward by ward and the standard of proof is on a balance of probabilities”.