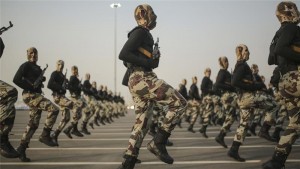 Russian Prime Minister Dmitry Medvedev has warned that the deployment of foreign ground troops in the Syrian conflict could result in a world war. Medvedev was quoted as saying in an interview published late on Thursday by the German newspaper Handelsblatt that “a ground operation draws everyone taking part in it into a war”.

When asked about a recent proposal from Saudi Arabia to send in ground troops to Syria, the Russian prime minister answered that “the Americans and our Arab partners must consider whether or not they want a permanent war”. Al Jazeera’s Rory Challands, reporting from Moscow, said Medvedev’s comments were an explicit warning to the United States and its regional allies, including Saudi Arabia.

“He basically told them to back off on sending troops because if they did, this might result in some sort of interminable or even a world war.” Medvedev also criticised Western powers’ refusal to collaborate with Russia in Syria. The prime minister said ties at the level of defence departments were only sporadic. US Defense Secretary Ashton Carter, meanwhile, welcomed a commitment from Saudi Arabia to expand its role in Syria against the Islamic State of Iraq and the Levant (ISIL) group. At a gathering of more than two dozen defence ministers at NATO headquarters on Thursday, Saudi Arabia renewed the possibility of sending ground forces into the conflict.

“Saudi Arabia’s defence minister … indicated that the kingdom is reinvigorating its commitment to the coalition air campaign, which is very welcome news, and contributing in other critical ways on the ground,” Carter said after the talks in Brussels. Saudi Arabia’s Brigadier General Ahmed Asseri said his country was ready to send troops into Syria if there was a consensus in the anti-ISIL coalition. But he declined to elaborate, saying: “It is too early to talk about such options.