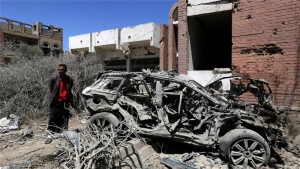 Air strikes in Yemen have killed 40 people in a market northeast of the capital Sanaa, residents say. Saturday’s air strikes in the Nehm district in Sanaa province wounded 30 others, they told Reuters news agency, adding that most of the casualties were civilians. The attack hit Khulaqa market, which is known for selling qat, a mild narcotic that is chewed throughout Yemen, witnesses said.

Residents said the strikes were carried out by the Arab coalition, a force assembled by Saudi Arabia.  The Arab coalition has yet to comment on the report. The coalition is battling the Houthis and forces loyal to former president Ali Abdullah Saleh in a bid to restore the internationally recognised government of President Abd-Rabbu Mansour Hadi. Coalition-backed loyalists have been advancing in Nehm against the rebels as they try to close in on Sanaa.

The UN says nearly 6,000 people have been killed in the fighting, which began after the Houthis advanced on the southern port city of Aden, where Hadi had been based. Hundreds of thousands have been displaced.

The coalition launched in late March 2015 an air campaign against the rebels. Saudi Arabia sees the Houthis as a proxy for Iran, its main regional adversary. The Houthis and Saleh accuse the coalition of launching a war of aggression. Rights groups have repeatedly urged the coalition to avoid causing civilian casualties.