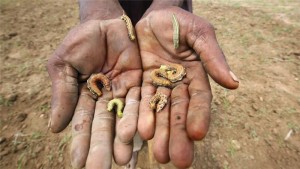 Zimbabwe has appealed to local businesses and charities for more than $1.5bn aid to save more than a quarter of the population from starvation due to drought.

“The government of Zimbabwe requires a total of [$1.57bn] with effect from February to December 2016,” Zimbabwe’s vice president Emmerson Mnangagwa said at a news conference in the capital Harare on Tuesday, adding that more than three million people were in need of food and water.

“The amount of rainfall received to date is inadequate to meet basic household consumption needs as well as support for livelihoods, agriculture and wildlife.”  Mnangagwa’s appeal came barely a week after President Robert Mugabe declared a “state of disaster” in many rural areas hit by severe drought.

Zimbabwe has been affected by a regional drought worsened by the El Nino weather phenomenon that has also affected other Southern Africa countries, including South Africa, Malawi and Zambia. Mnangagwa said the southern parts of the country are the worst affected with tens of thousands of cattle dying, boreholes drying-up and dam levels decreasing due to the poor rains.