At least 14 people were killed and dozens more injured when a flyover collapsed in a busy Indian city on Thursday, an official said, as emergency workers battled to rescue people trapped under the rubble. 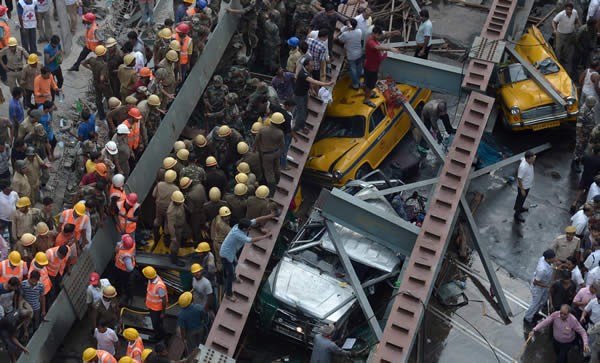 The flyover was under construction when it collapsed onto a crowded street in the eastern city of Kolkata around lunchtime, crushing pedestrians, cars and other vehicles under concrete slabs and metal.

“The rescue operation is still on as many people are trapped under the debris.”

Police and pedestrians initially used their hands to try to move fallen girders and steel rods to reach people. An AFP reporter saw body parts in the debris.

Soldiers then rushed to the site, television footage showed, as locals armed with bamboo sticks raced to lift rubble and crowds gathered in the hope of hearing news of loved ones feared trapped.

“Everything is finished,” screamed Parbati Mondal, whose fruit-seller husband was missing in the collapse.

Kolkata, in India’s east, is the venue of this Sunday’s World T20 cricket final which is set to draw thousands of fans to the city.

Construction on the flyover had been delayed for several years in the congested city, according to local media reports.

Television footage showed one bloodied body trapped under a concrete slab, and also the hand of a person sticking out from under twisted debris.

An eyewitness at the scene described a loud bang “like a bomb blast and suddenly there was a lot of smoke and dust”.

“I looked at the other side of the road and people were screaming: ‘The bridge is collapsing’,” the unnamed man told television networks.

A crane was seen lifting a mangled car from under the debris and part of a crushed bus was visible protruding from the rubble, although it was unclear if it had been carrying passengers.

Firemen were also on the scene, fighting a blaze that ignited from spilt petrol.

“Monumental tragedy. Rescue ops on. Many feared dead,” tweeted Derek O’Brien, a lawmaker and spokesman for the ruling Trinamool Congress Party in West Bengal state, of which Kolkata is the capital.

Home Minister Rajnath Singh said he was monitoring the situation adding that he was “deeply saddened to know that precious lives have been lost in the Kolkata accident”.

The accident is the latest in a string of deadly construction collapses in India, some of which have highlighted shoddy building standards.

A huge demand for housing, roads and other infrastructure in India often results in cost-cutting and a lack of safety inspections.