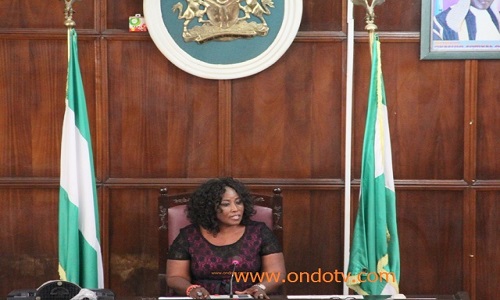 The Speaker of the Ondo State House of Assembly, Jumoke Akindele and her deputy, Falal Olotu, have been impeached.
They were both impeached on Tuesday night by 18 of the 26 members of the Assembly.
The lawmakers, who carried out the impeachment at the residence of one of their members, also elected Iroju Ogundeji and Ayo Arowele, as speaker and deputy speaker respectively.
Although there is no official word on the reasons for the lawmakers’ action, it was gathered that the house members were angry with the leadership for failing to protect their interest.
According to a source close to the assembly, the lawmakers complained of being owed three months salary, with some of them having no official quarters.
They were said to have accused the leadership of failing to protect the larger interest of members and was becoming a stooge of the governor, Olusegun Mimiko.
Efforts to reach officials of the assembly were unsuccessful, as they did not answer or return calls. They also did not reply to text messages.