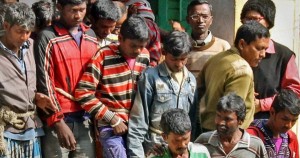 The Indian police arrested 27 men this morning in the state of Odisha, for the alleged “sexual assault” of a holy statue of the Hindu god, Ganesh. The crime, which took place on Tuesday night, shocked the entire country, who had already been shaken by several sexual scandals over the last few years.

The 27 accused are presumed to be part of a larger group of men who pierced a hole in the abdominal area of a temple statue, before engaging in sexual intercourse with it.

The scene was witnessed by a few neighbours who contacted the police, but the men had already left when the authorities arrived on the site. Fortunately for the police, two of the men bragged about their crime to a group of friends, who immediately denounced them. During their interrogation, they rapidly gave the names of many other men who had participated in the crime.

The Odisha State police and the Bhubaneswar–Cuttack Police Commissionerate launched a vast joint operation this morning, and were able to arrest 25 of the 31 suspects they were looking for. “These men took part in one of the most horrible crimes in the history of the country,” said Captain Jayesh Kumar, spokesman of the Odisha State Police. “I really hope the tribunal will make an example of them, to show everyone that such unacceptable behaviors have serious consequences.”