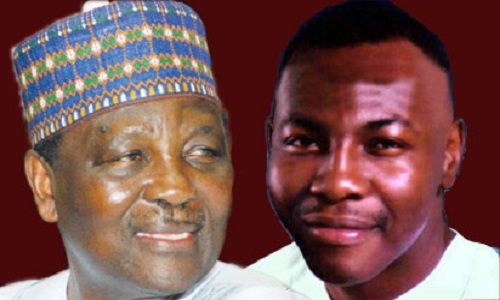 The former military ruler announced Wednesday that result of DNA test confirmed that Musa Jack Ngodadi, is his biological son.

The younger Gowon, who was initially sentenced to 40-years imprisonment for alleged drug-related offences of which he was found guilty in November of 1992, was pardoned last year by President Barack Obama after spending 22-years out of his prison sentence.

Musa Gowon returned to Nigeria on January 1, 2016, after the U.S. Immigration officials deported him.

According to reports, Musa was the product of a romance between Gowon, then military head of state and an Igbo lady, Edith Ike-Okongu.

But the romance ended abruptly over the Nigerian Civil War and how it was being prosecuted by Gowon, who was then Commander-in-Chief of the Armed Forces.

Edith was said to have protested the manner Nigerian troops had maimed and killed her fellow Igbos, under a government of a man she was in love with.

Edith was said to have left Nigeria for the U.S while Gowon, who was Nigeria’s youngest head of state, tied the knot with his present wife, Victoria.

She was reported to have later returned to Nigeria after decades in the U.S., leaving behind her son, Musa Gowon, who allegedly got involved with some Colombian drug dealers resulting in his arrest and imprisonment in 1992.

Though he strongly denied being guilty of the crime as he insisted that he was framed up, Musa was sent to the Taft Correctional Facility, Bakersfield, California, to serve a 40-year jail term.

A press statement by the former military head of state acknowledging Musa as his biological son reads:
Following years of doubts and speculation, a DNA test was recently conducted to ascertain the paternity of Musa Gowon who recently returned to the country.

The results of the tests were conclusive and they confirm his paternity.

We, the family, are working to assist in his rehabilitation following a very difficult period in his life.

As we look forward to the future with faith in God, we request that our privacy be respected.