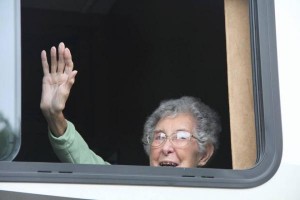 A 90-year-old woman from Michigan decided to turn her cancer diagnosis into an excuse to travel across the United States. The woman named Norma is accompanied by her son Tim, daughter-in-law Ramie and their poodle Ringo, who document her adventures via the Facebook page “Driving Miss Norma.” Norma learned of her cancer within two weeks of her husband’s death and told her son prior to the diagnosis that she had no interest in treatment.

“”I’m 90-years-old, I’m hitting the road,” she said. Her son and his wife then explained to the doctor that they would be driving her around the country in her RV and ultimately received his blessing. “As doctors we see what cancer treatment looks like every day,” he said. “ICU, nursing homes, awful side effects and honestly, there is no guarantee she will survive the initial surgery to remove the mass. You are doing exactly what I would want to do in this situation. Have a fantastic trip!”

In August the family upgraded their motor home to a larger 36-foot model and began their trip by traveling to Mount Rushmore in South Dakota before continuing through the country, visiting other landmarks and historical sites such as Kennedy Space Center in Florida.

Rami told ABC News that in addition to seeing the sites and gaining more than 100,000 likes on her Facebook page, Norma’s health seems to be improving. “She’s getting healthier, I think, from eating well and being outside a lot. She’s breathing fresh air and getting to see new things all the time,” she said. “She’s with her loved ones that’s really important.”