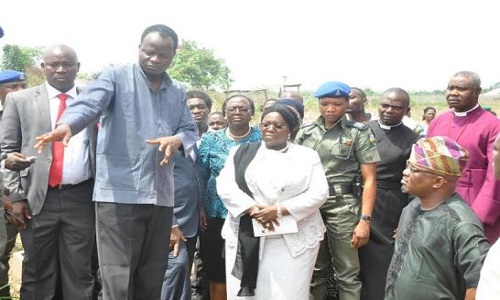 The Lagos State chapter of the All Progressives Congress, APC, has condemned the dastardly kidnap of three secondary school students in a school in Ikorodu, describing it as a callous and inhuman act by criminals who want to test the resolve of the present Lagos State government to drastically reduce criminality in Lagos.

The kidnappers, discovered to be militants turned vandals, had reportedly stormed the Babington Macaulay Junior Seminary School in Ikorodu on Monday evening, and abducted three Senior Secondary School female students.
There are reports the abductors have demanded a ransom of N20 million for each student.

But the governing party in Lagos demanded the immediate release of the kidnapped female students, calling on all security agencies to ensure no stone is left unturned in rescuing the girls and arresting the perpetrators.

The Publicity Secretary of the Lagos APC, Mr. Joe Igbokwe, in a press statement on Wednesday, said the kidnap of the secondary school students was a frantic attempt by criminals to liberalise crime in Lagos, but said that the state was capable to take on this callous challenge.

It urged the Lagos State government to spare nothing to rescue the girls and ensure such acts are nit release in the future.

“We see the abduction of secondary school girls as a new height in criminality and a dangerous one for that matter so we urge all the relevant security agencies to move in immediately and nip this criminality in the bud to ensure it does not spread. We refuse to see reason why some group of people can plan such despicable act against vulnerable school girls and we urge the state government to move in with its known precision to free the girls and arrest the culprits so as to send clear messages to criminals that Lagos still remains a hostile ground for their criminality.

“We are alarmed that some criminals were so callous as to kidnap innocent school girls for whatever reason. We are alarmed that heartless criminals can go to such bestial extents to perpetrate such heinous crimes against school children and we say this marks a dangerous dimension to criminality. We see this as a frontal challenge to the state’s extensive security network of the state and urges the state security structure to spare nothing to ensure the girls are rescued and the criminals arrested to face the full wrath of the law.

“We join all well-meaning Nigerians to express deep concern about the safety of the abducted girls as we challenge the Lagos State security agencies to put measures in place to ensure that no such criminality is perpetrated against school pupils in Lagos. We ask the kidnappers to immediately free the schoolgirls unconditionally as holding them further will only heighten societal anger against them. We demand that nothing be done to compromise the security and well-being of the girls and task all relevant agencies to move in and take quick and immediate catkins to free the girls.

“Lagos APC urges Lagosians to be at alert and report to the state security agencies any information that may lead to the quick rescue of the kidnapped school girls as well as information that may forestall such ugly incidences in the future. We urge all to look out for clues for such heinous crime in the future and report to the security agencies for we cannot afford to allow the security of our children to be compromised by heartless criminals”, the party said.