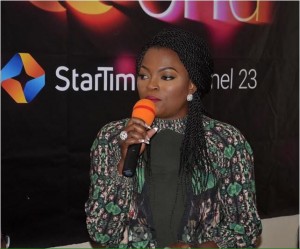 It’s from one endorsement deal to the next for Nollywood actress, Funke Akindele.

The comic actress has just signed an endorsement deal with Iroko TV.

The actress was unveiled as the company’s brand ambassador on Wednesday at IrokoTV’s headquarter in Ikeja, Lagos.

Speaking about the deal, according to the company’s Head of Legal & Distribution, Uloma Onuma, “Our choice of Funke Akindele was because she has proven to be not just a multi-talented award-winning actress, but an inspirational character that excites many Nigerians with her educative and interesting movies as well as her comic character Jenifa.”