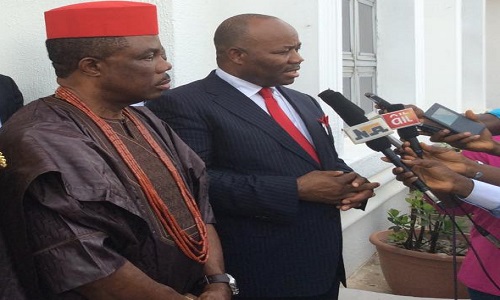 Akpabio made the pledge Thursday while delivering a lecture as part of activities line up for the university’s 7th convocation.

In his lecture on “The Nigerian Question: Ethics in an Age of Uncertainty”, Senator Akpabio, a two-term governor of Akwa Ibom State, called on Nigerian leaders to uphold ethics and morality as part of efforts to curb corruption in the country.

He defined ethics as doing things that are right and moral.

The Senate leader also hailed the Federal Government’s anti-corruption campaign but stressed that it should be done across board.

He assured the gathering that members of the National Assembly would continue to maintain ethics and good moral behaviour in making laws in the interest of the masses.

Vice Chancellor of the University, Prof. Fidelis Okafor, commended Akpabio for his promise to build a hostel in the institution.

Mr. Okafor urged students and graduates to imbibe the spirit of morality in life.

The News Agency of Nigeria (NAN) reports that the institution will hold its convocation on March 18.