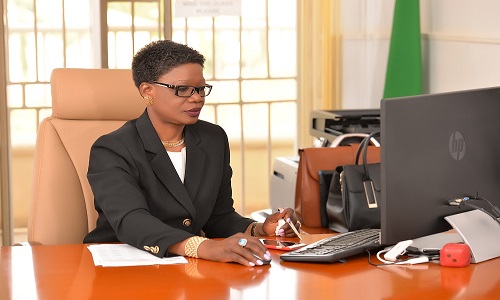 The Executive Secretary/Director General of the Pension Transitional Arrangement Directorate, PTAD, Mrs. Nellie Mayshak, has been suspended from office indefinitely over her alleged culpability in financial fraud.

The directive suspending Mrs. Mayshak from office was contained in a statement yesterday by the Minister of Finance, Kemi Adeosun.

A director in the office of the Accountant-General of the Federation has been named acting head of the PTAD with immediate effect.

PTAD was established in August 2013 under the Pension Reform Act of 2004 to oversee the management of pensions under the defined benefit scheme for pensioners not transiting to the defined contributory scheme.

Although the exact reasons for the former PTAD boss’ suspension was not given, there reports of unwholesome financial dealings traced to her. One such reports stated that Mrs. Mayshak pocketed N60 million as her monthly salary but this claim could not be independently verified even as investigations are still ongoing to determine the level of financial rot at the directorate.

He said in a statement: “Though media reports allege that the suspension is as a result of scam running into billions of naira, the general public should please be informed that the details on the issues relating to the suspension are yet to be made available”.

Mr. Saleh, however, assured pensioners that the development would not affect pension payments and services and that further information would be provided as available.