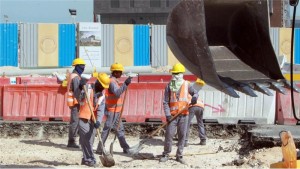 Workers in Qatar renovating a stadium for the 2022 World Cup have suffered rights abuses two years after the tournament’s organisers drafted worker welfare standards in the wake of criticism, Amnesty International said. According to a report released on Thursday, dozens of construction workers from Nepal and India were housed in squalid accommodation and barred from leaving the country by employers in Qatar who confiscated their passports.

The Supreme Committee for Delivery & Legacy, the organisers for the 2022 World Cup, told Al Jazeera that “the conditions reported were not representative of the entire work force on Khalifa [the stadium where the workers were interviewed]”.  Between February and May 2015, Amnesty says it interviewed 132 workers involved in the rebuilding of the Khalifa stadium, a sporting complex in Doha that is set to host one of the knockout games of the tournament.

The report said staff from one labour-supply firm threatened to withhold pay and report workers to police to exact labour from migrants, which the group called “forced labour”. When Amnesty International researchers returned to Qatar in February 2016, some of the workers had been moved to better accommodation and their passports returned by companies responding to the findings. “The abuse of migrant workers is a stain on the conscience of world football,” said Amnesty International Secretary General Salil Shetty. “For players and fans, a World Cup stadium is a place of dreams. For some of the workers who spoke to us, it can feel like a living nightmare.”