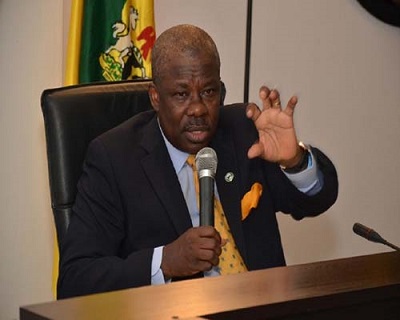 The two-week feud between the Ogun State Government and organized labour in the state has been resolved.
The state governor, Senator Ibikunle Amosun and leaders of organized labour in the state have reached an understanding on the controversy relating to workers’ cooperative deductions, unremitted contributory pension scheme and gratuity.
The rapprochement was the result of a meeting between Amosun and Chairman of the Nigerian Labour Congress (NLC) in the state, Akeem Ambali, and his counterparts in the Joint Public Service Negotiating Council (JNC) led by Abiodun Olakanmi, held last week at the governor’s office.
At the end of the meeting, the labour leaders said they were satisfied with the facts presented by the government about the financial position of the state.
Briefing reporters at the end of the meeting, Governor Amosun disclosed that the state got about N1 billion from the federation account for the month of February, while its wage bill stood at over N9 billion monthly.
He said, “We have seen the financial position of our state and it is not just Ogun State. The economy is down. For example this month, the allocation that came to the state is almost N1 billion and our commitment, the one that we can safely say that ‘this is just for personnel’ either for civil service, public service, house of assembly and our workers, is about N8.4 billion and there are some we must do which put the money at over N9 billion monthly.
“This month alone, all that we were given as a state is over about N1 billion and the local government got about N1.4 billion. Why I speak on local government all of the time is because they don’t have anywhere else to go. If the total that was given to local governments this month is about N1.4 billion, the primary teachers’ salary if we have to pay is about N2 billion. That mean, there is a problem and of course and we are not magicians”.
In his comment, Mr. Ambali said: “We had a very instructive meeting and I want to commend the government. For the first time, we were down to earth with one another and facts were presented. We looked at it and the labour also presented some credible facts to the government and at the end of the day, we agreed that government should go back and do some assignment while labour should also do its own part”.