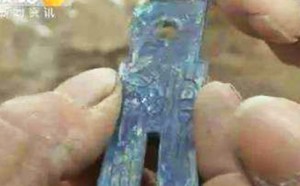 A farmer in western China has dug up nearly half a tonne of ancient coins that date back to the time of Jesus. The farmer, surnamed Zhang, discovered the coins, which weighed 459kg, on Saturday while he was preparing the foundations for his village house near Xingping, Shaanxi province, local television station SXBC reported.

A local heritage inspection team dated the coins to the reign of Wang Mang, a Han dynasty official who briefly usurped power from the Han dynasty from 9AD – 23AD. The hoard of coins was buried in a hole about 50cm deep and 60cm wide, Zhang said. Some were round with square holes, others were spade-shaped, and there were smaller ones the size of buttons. Zhang called the police after the discovery and the coins were taken away by heritage inspectors.

An official said further identification would be needed and that the coins would later be kept by state-run museums. Almost a year ago, a farmer in Haikou, Hainan province, found 60kg of coins 1,000 years old buried on his farm. But archaeologists said they were not valuable as a large amount of similar coins had also been discovered across the province over the years.

The farmer said that during the 1980s, his family had also dug up another 80kg of similar coins, which they later sold off as regular copper. Farmers across China have made the initial discoveries of many precious artefacts. Perhaps the most significant of all occurred on March 29, 1974, when farmers digging a well east of Xian, Shaanxi province, found the buried Terracotta Army of Qin Shi Huang, the first emperor of China.