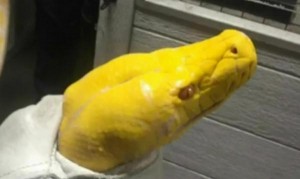 A man allegedly threw a 13-foot python into a California sushi restaurant after getting into an argument, according to police. Authorities said the man had been dining while holding a small snake at Iroha Sushi of Tokyo in Studio City at 7:30 p.m. on Sunday.

Witnesses said he became angry and got into an argument after showing the small snake to several customers. He later returned to the restaurant with a 13-foot python, allegedly yelling obscenities, and tossing the python on the floor.

“We asked him like three or four times and he said, ‘no.’ He was like starting fights with the customers so we had to call the police and fire department,” waitress Sissi Dashtort told CBS News.

The snake attempted to slither away and became stuck before animal control were able to place it in a box and took it away. Police say the man was arrested and charged with criminal threats. No one was hurt in the incident.