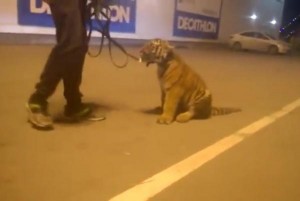 A drunken animal keeper who took a tiger cub for a walk to a Russian shopping mall was fired by the circus and fined by police.

Witnesses captured multiple videos Thursday showing the man walking and playing with the small tiger cub outside the Ryazan Shopping Mall in Russia.

Police responded to the mall and the man, who was found to be drunk, was fined about $70 on a petty hooliganism citation.

The circus said the man was an employee charged with caring for the animals and was fired following the incident.