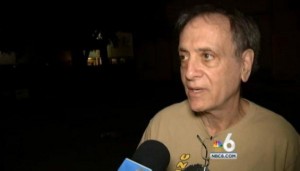 Steve Rosen, a cat lover from Davie, Florida, is prepared to do whatever it takes to recover his six missing pet cats. Seven of his feline have mysteriously disappeared in the last year and only one has returned to him so far. Despite hiring a private investigator and offering a hefty reward of $30,000, he has been unable to find out what happened to them. Rosen, a retired dentist and skin care entrepreneur, claims that his cats first started disappearing in March 2015, one at a time. “They’re like my children,” he said, speaking to NBC 6. “Imagine one of your children disappears and then a month or two later, another one disappears. Granted, I know they’re not human beings, a lot of people can’t relate to it, but those of us in animal rescue would know what I mean.”

All the cats were microchipped and had radio collars, so Rosen tried looking for them himself. When that didn’t work, he hired a private investigator and also set up a $10,000 camera system to catch the thief. Those options didn’t generate any leads either, so out of sheer desperation, he decided to announce a reward to anyone who could bring his cats back or supply information to their whereabouts. At first he offered a $20,000 prize, but later increased the amount to $30,000. “I’m relying on greed,” he said.

64-year-old Rosen placed a full-page ad in the Sun-Sentinel last week, announcing the sizable reward. “Someone has systematically taken my cats between March of 2015 and February of this year,” he wrote in the ad. “Where they have taken them, what they have done with them is unknown. They were impeccably cared for and were part of my family. They are missing only because they trusted whoever picked them up and did not run away.”

Only one cat, a black-and-white male named Bandit, has returned to Rosen so far. The poor creature was eight pounds lighter and covered with rust. But the other six – Misty, Peaches, Pepper, Frankie, Honey, and Checkers, still remain missing. Rosen said that each of the cats is special to him because they all have a story. “A couple were given to me by people who found them,” he explained. “Misty the gray one was found as a kitten starving in a McDonald’s parking lot.”