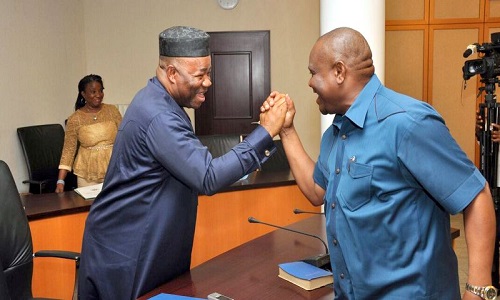 Governor Nyesom Wike of Rivers State on Tuesday declared that the All Progressives Congress (APC) is not in a position to win any election in the state.
A statement issued by the special assistant to the Rivers State Governor on Electronic Media, Simeon Nwakaudu, also quoted the governor as alleging that his predecessor and current Minister of Transportation, Rotimi Amaechi, was sponsoring violence to remain relevant politically.
Governor Wike said with the proofs of corruption against Mr. Amaechi, the former governor resorted to blackmailing the leadership of the All Progressives Congress that he would reveal to the public how much he invested in the party’s campaign if he was not confirmed as a minister.
Mr. Amaechi was Director General of the APC Presidential Campaign Organization in the 2015 presidential elections and was accused by the Peoples Democratic Party, PDP, of using Rivers funds to finance the party’s electoral campaigns, an allegation he vehemently denies.
This is even as the Senate Caucus of the PDP led by Minority Leader, Senator Godswill Akpabio, insisted that the Independent National Electoral Commission, INEC, must release the collated results of the March 19, 2016 rerun elections.
Speaking during a solidarity visit by the PDP Senate Caucus, Governor Wike said the Minister of Transportation lost his local government area and Federal Constituency, hence his desperation to influence the release of the results.
He said: “Any person who loves Mr President won’t be causing unnecessary crisis for him. We have problem in the North East, problem in the South-East, so there is no need for another problem in the South-South.
“It is good that the elections were held so that Nigerians will know the truth about the polity. If elections are held 20 times, PDP will win”.
The governor decried the role played by soldiers during the rerun elections. He said the military were directly involved in the elections at polling units and at the collation centres in direct violation of the Electoral Act.
He regretted the killing of the corps member, Samuel Okonta, during the rerun elections, but stressed that investigation into the type of bullet that killed him must be made public. He confirmed that the state government will immortalise the late corps member.
Earlier, Akpabio said the victory recorded by the PDP in Rivers State is “A clear case of justice being done by God”.
While describing Rivers State as peaceful, Mr. Akpabio, regretted the sponsored propaganda by the opposition to destroy the image of the state. He said there was no other political party in the state outside the PDP.
He called for tolerance in the political space to allow for the sustenance of the state’s multiparty democracy.
The high point of the visit was the donation of N1million by the Senate to the family of Mr. Okonta through Governor Wike.
Mr. Akpabio prayed that Mr. Okonta’s death would be the last during elections.
He also commiserated with the government and people of the state over the death of PDP members during the rerun elections.